Experimentation for the new season

Anglers are forever looking for ways to give themselves the edge over trout, and one of the most popular ways is in fly development.

Now firstly, let me tell you straight: I’m a presentation guy – I believe that with good technique and correct presentation, any nymphing fish can be taken on the good old Hares Ear nymph or similar tried and true pattern. This is my opinion and the approach I take for New Zealand’s opportunistically feeding trout. However, many anglers wiser than myself look for that edge by experimenting with state of the art materials and developments in their ties. It is one of these developments we will look at here.

Hotspots are not new in the fly fishing world. I know of anglers who have been implementing them for years, but as with many developments in the world of trout flies, of recent they have gained mainstream popularity; Secrets out fellas! 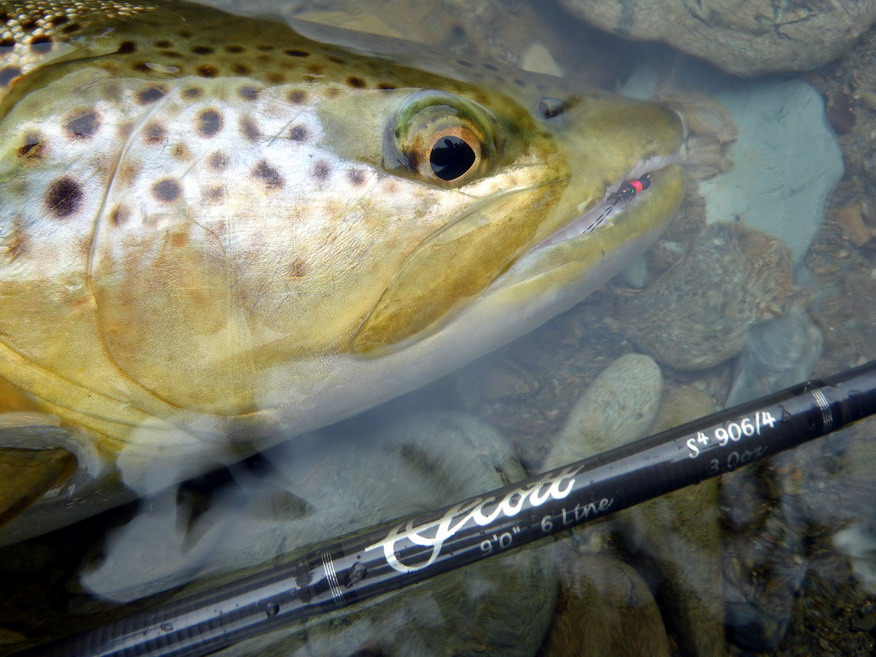 Note how prominant a little pink thread can be wrapped behind the bead.

So what is a hotspot? Quite simply, a hotspot is a brightly coloured aspect of your fly, whether an orange thorax on your pheasant tail, a few turns of pink thread in behind the head, or a yellow section of the abdomen, whatever. You could even employ an orange bead to generate this effect.The theory behind hotspot flies is to ensure the trout see them. In the drift, your small dark nymph may be just one of a dozen within the trout’s given foraging area, and whilst your fly should remain consistent in regards to its prey image, you really need something to catch the trout’s eye and stand out from the myriad of naturals.

Traditionally I have found Glister sparkle dub to suit this purpose, adding that ‘subtle bling’, but in colouring water or low light conditions, a bright orange, pink, green, red or whatever band really stands out. Your fly catches the trout’s attention, whilst still retaining suitable size, silhouette and overall appearance.

Some believe certain colours will trigger an automatic response from the trout, such as orange for rainbows, and red for browns, but those I have talked to do not think colour matters as much – its just the implementation of a colour that will stand out in the drift, get noticed, and then allow the other attributes of the fly seal the deal.

Canadian Bob Bohling is a thinking angler. He has spent much time studying and fishing for a number of species throughout the world with much success, and has spent a lot of time experimenting with Hotspots over the years. He believes that fluorescent colours such as green, orange, yellow and the like show up well in colouring waters, and when fishing down a little deeper when other colours begin to lose their effectiveness. Purple is a favourite for deep nymphing in lakes, as it retains its colouration in the lower end of the light spectrum.

In clear water conditions or on brighter, bluebird days Bob employs more subtle colours such as burnt orange, brighter greens and even pale blue. Again the idea is to simply make his flies stand out from the naturals, and in clearer conditions one does not have to go as bright to achieve this. Its also interesting to note the size of his hotspots; for bluebird days they may be but a few turns of thread in behind the bead, whereas for getting the job done in dull or coloured waters, his hotspots may make up the entire thorax, wing case or even the entire abdomen of the fly. Weather employing thread, floss, or dubbing, Bob implements a hotspot of sorts to most of his nymphs, and the occasional streamer too.

Likewise, it’s rare to find a fly in the box of Montana’s Mike Sousa which doesn’t sport a hotspot. Mike fishes a lot of what we would call ‘micro flies’ down to size 24, which are the norm on many of his local streams. There isn’t a whole lot to catch the trouts eye in a 5 mm fly, and so by implementing fluorescent beads, or hot orange tails, he increases his chances of his flies being seen, whilst minimizing the bulk of the fly.

Mike fishes a lot of tail waters and spring fed streams where invertebrate numbers are far beyond anything we experience here on our NZ waters. At any one time, the invertebrate drift can best even the largest of Mataura hatches, and so a pair of anglers nymphs can seem rather lost out there in amongst the masses. Mike insists to be successful on such waters you must have flies that the fish can key in on, and believes that by implementing hotspots he dramatically increases his success.

I am not sure, personally that I’m a hotspot convert just yet. I do prefer them to gold beads however, which I find on my waters spook more fish than they deceive. Hotspots perform the same task of highlighting my fly to the trout, but without ‘over the top’ flash.

However, a recent experience on a lowland tributary identified their potential to a friend and I in rising, and rapidly colouring water. The fish were on the feed as the rain came in, and simply did not react to traditionally successful patterns. They would continue to feed but not to my fly, despite repeated presentations. Upon tying on the same pattern, but with a pink band of thread in behind the bead, fish after fish succumbed there on in. An essential trigger, or just a means to catch the trout’s eye to my otherwise traditional Hares Ear?

The research and development continues.