Attention Kiwi Anglers - Invest In Yourself
by Chris Dore

As many of you will have noticed through my writings, over the past decade my ideas on fly design and effective patterns have developed a lot. One could say I have gone the full circle.

I believe this to be an essential trait of any fly fisherman, and the ability to keep an open mind, adapt, and accept new ideas where applicable and implement them appropriately will ensure one keeps up with the game.

This article has been inspired by the many requests I have received of recent for information on the flies I use, and why I share full confidence in such a limited range of patterns. Now I do not believe the flies I use are anything flash – in fact, they are kind of boring from a tiers perspective, but they sure do work!

So here’s the story about how I’ve come about my current ‘go to’ selection over the past fifteen seasons.

Stage 1; What began as an enthusiastic beginners penchant for the tradional ‘tried and true’ ties such as the Hare and Copper and Cochy Bondhu soon became replaced with more exact imitations as my entomological interests, along with my tying confidence grew.

I quickly became besotted with the Mataura, and overnight I hit stage 2, where my ties developed exotic, Latin names and were tied in exact proportion to the naturals they represented. Now the combination of colouration, translucence and UV reflective materials to better replicate an impression of the natural became my big thing.

A couple of years later, Stage 3 developed after reading an article in an American magazine detailing the supernormal releaser theory. Hot spots, bulging thorax’s and exaggerated legs took over my flybox, but didn’t last for long once I really thought about it… They threw out the proportions of my carefully imitative patterns without noticeable benefits as gauged in actual hook ups. Back to exact imitations I went. 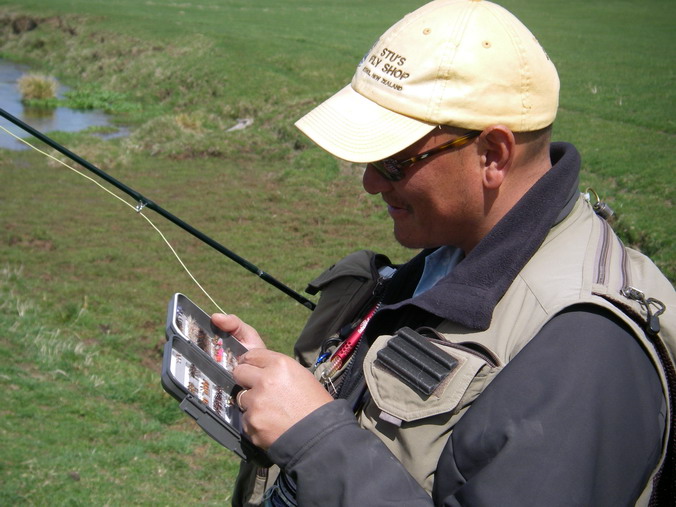 Stage 4 kicked in with a hiss and a roar after studying some underwater footage of nymphs in the drift. Movement to me was now the key! Disjointed bodied nymphs and extended bodied dries, with rubber legs and soft hackles overflowing my many fly boxes. Oh yes, to catch our southern trout one just had to sport life-mimicking action in their flies. Anything else would simply not work in my eyes.

Dry flies were still tied with many hours put into the winging, and even winding of hackles, only to have others lose them quickly or feed them to the willows as my guiding career kicked off. Each hurried forward cast represented up to 15 minutes of bench time and got me wondering how I could better make use of what limited tying time I had.

Stage five was all about efficiency, and I began tying more for durability, and to get the most out of my time at the vice. I began looking at what the trout saw, rather than what we as anglers would see when the fly boxes were opened and on display. I aimed to cut my tying time down to 5 minutes per fly so as to lessen the heartbreak following a succession of lost flies. This meant the omission of legs, wing cases and wings on my flies and guess what – I still caught fish!

So back to the basic, tried and tested, traditional patterns I went, and why not?

Hares Ears and other generally ‘buggy’, impressionalistic flies have caught fish for many decades on my local trout streams – what would make them less effective now than when my Grandad use to present them on the Mataura in the 50’s and 60’s? Mayflies haven’t evolved that much have they?

My sixth stage was when I began thinking of first impressions, and how important they are to the trout. In the Mataura riffles, and other faster water areas fish do not have a lot of time to examine the fly. The number of legs or anatomically correct ribbing did not matter to these fish, they simply had to see the fly, recognise it as food, and hit.

Size, shape and colour were the obvious factors here, and knowing that deleatidium and olinga make up the majority of the invertebrate found in the Mataura riffles, and in fact the majority invertebrate biomass in many of the streams I frequent, small and dark seemed to be the place to begin. My introduction to Bob Wyatt, author of the thought provoking book ‘Trout Hunting’ around this point in time both solidified and enhanced my theories, gave them direction it could be said and my approach to fly design today is now largely influenced by Bobs prey image theory. I will not delve into this here, for I have many times before, but if you look through your back catalogue of Troutfisher, you will find my thoughts in detail amongst their pages.

So to the vice I went churning out many hare fur creations which were pretty much just variations of the old stalwarts, the H&C and Hares Ear nymph.

I played with hare fur and pheasant tail with success, but in the back of my mind something was nagging at me; at any one time there could be a dozen or so naturals within a trouts foraging area – how can I get him to choose my imitation over the natural? How do I better catch his eye without raising suspicion, and make my fly his first choice? My fly box does look extremely dull…

The seventh (phew) and present stage came as I started playing with a little flash, adding ‘bling’ to my flies. In my mind this is the way to make my nymphs stand out from the crowd, and ensure it catches the trout’s eye in amongst a p 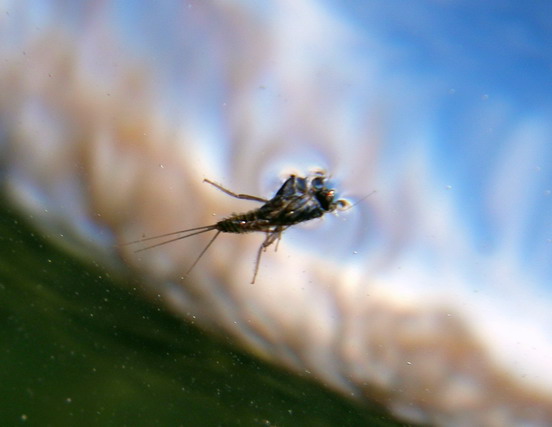 lethora of naturals. A shiny wing case or similar addition was deadly on those duller, overcast days, but would often put fish off when the sun shone. My favourite product to this day for incorporating flash into a tie is Glister, a synthetic sparkle dub. Many anglers are put off by its flash, and so use only a small amount for collars, or to mix amongst other more natural furs, but I love the stuff. Use as much as you want to enhance the properties of any subsurface fly.

I find Glister adds a subtle flash to ones fly, without going overboard. It will catch the trout’s eye in the drift without raising the suspicion a brighter, more reflective material may sport. I have turned many people onto my glister nymphs over the past few seasons and the majority now swear by them. Simplicity combined with efficiency; my kind of fly.

After many years of personal experimentation with different materials, patterns and tying techniques I now feel the success of any one fly comes largely down to angler confidence. You must have faith in the pattern you are fishing, and possess the ability to fish it well. If your fly doesn’t behave like the natural it represents, or is presented poorly, alarm bells will ring, no matter the design.

I do not believe one needs a large number of patterns requiring several boxes in the vest. I believe you want a good nymph, an effective emerger pattern, a buggy ‘general purpose’ dry and a streamer, and I can comfortably limit my fly selection to four ‘go to’ flies which I feel will cover most situations I find in the south.

Each fly takes no more than a couple of minutes to tie and uses minimal materials.

Having the right size, and / or weight in my opinion is more important than possessing a variety of patterns, and whilst I do carry specialist patterns such as damsel nymphs, spent spinners, caddis etc in my box, it is rare that I ever need to produce one to secure a fish.

In the next issue of Troutfisher we will take a look at the above patterns and their creation, their applications, and why I feel each one is worth its weight in gold.

<<Back to main articles page