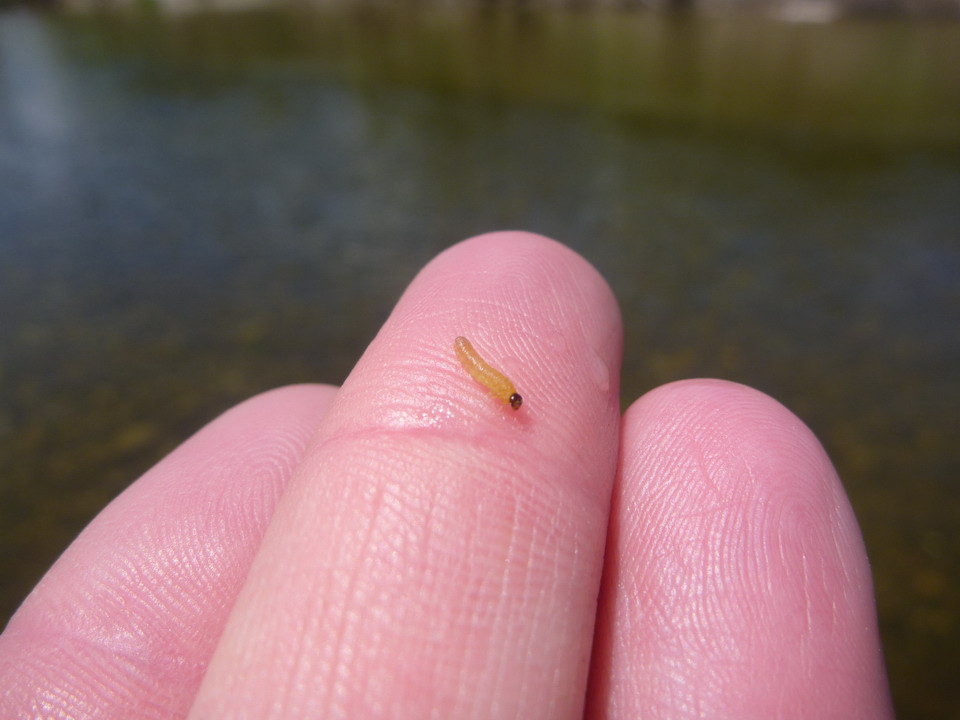 Well the summer weather is truly here! Hot, sunny days with high temps have both cicada, manuka beetle, as well as willow grub out in droves. However, this also means that rivers are at a very low level, and those smaller waters and others of the low country rise to rather high water temperatures during the day. Morning and evening are now the best times on these waters as trout go a little doggo as water temps rise mid afternoon. However they can still be caught! Look towards the cooler, more oxygenated water of the riffles and the faster sections. Trout will often move into the very heads of these riffles, the shallower, more agressive water providing both cover and oxygen as required. On the mataura and the likes, search out the shaded holes around the willows, as fish will abound here. Watch, and you will notice them moving out into the open periodically to feast on willow grub, mayflies in the film or a bout of nymphing.

In the cooler headwater and highcountry streams fish will be found feeding avidly on terrestrials. But they are by no means 'sitters'. In low water conditions fish become very flighty, and whilst they may be seen to be feeding avidly, a misdirected cast or wayward movement will send him to cover. 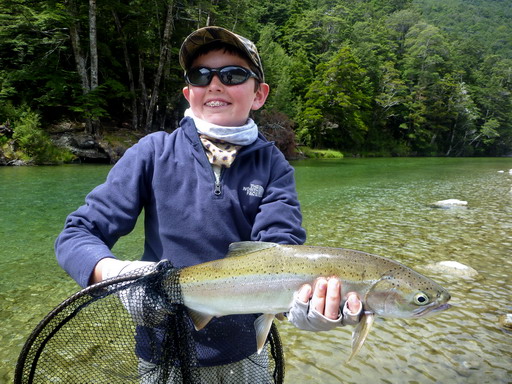 Be especially careful with fly placement. There is a theory that splashing a cicada or beetle down will incite the fish to strike. This is occasionally so, but in low, clear water often the result is a spook. Ensure your line and leader land well away from the fish with the fly landing far enough away so as not to bean him. This is where the ability to accuratly present longer leaders comes into play, and reach casting is of much benefit, keeping the mass of the flyline from landing too close to the fish. check out carl mcneils excellent online tuition at www.onthefly.co.nz to see what the reach is all about. and remember, no matter where the fly lands, fish the drift out. Firstly, trout will move considerable distances at times when feeding on terrestrials, but also, the tear of the line ripping from the surface can be felt / seen from a surprisingly long distance. Many trout are spooked by an angler picking up too close to the fish.

Forget false casting. Over the past while i have seen countless trout spooked needlessly as the angler false casts excessivly. My calls of " drop that, drop it, lay the fly down now!!!!" are often unheeded as the angler seems to require numerous false casts to provide confidence for accuracy, gain distance, or something. The result is usually the same... The fish takes off for cover, leaving us with the fly still in the air. This is something i encourage you to spend time eliminating. A good drill is to practice single pick up and lay downs at targets on the lawn set at various distances. Drop at the first target, then without false casting and simply pick up the line and drop it at the second target. Experiment with changing angles and shooting line. A short, efficient haul will increase line speed and allow for more efficient shooting. In my eyes, false casting is the devil, and at most, three false casts will get you to a target accuratly at most fishing distances, and two to many.

Another thing you can do to reduce false casting is to pull the required line off the reel prior to casting. Stripping line from the reel during the false cast is a waste of time, acheives distance painfully slowly, and often pulls the rod tip off course (bad tracking) whilst doing so. When i see a fish I often judge the casting distance in rod lengths. My 50' is likley to be different from your 50' but we can both look at the rod and judge three lengths similarly. I then know that 3 strips of line = around one rod length, so if a fish is sitting at around 4 rod lengths then 9 strips plus the length of the leader should about do it.

Its all about efficiency people and the less time the rod is being waved, or the line is in the air, the less chance we have of fucking things up 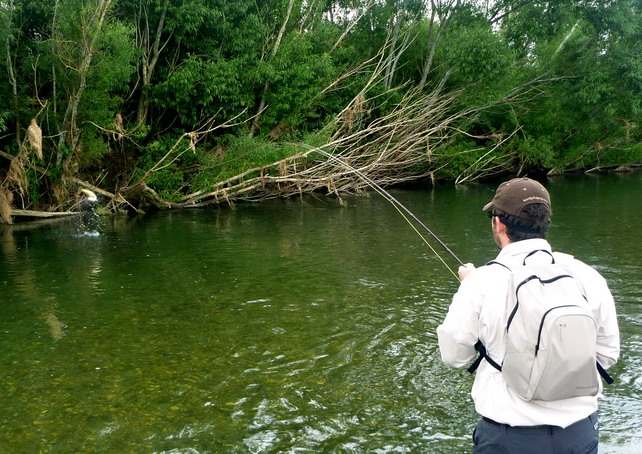 Wind too i feel is more of a psychological impediment rather than a physical problem onstream. Simply watch as the slightest bit of wind changes many anglers casting stokes from a short, crisp, efficient stroke into a flailing, wide arced, mistimed mess. When the wind kicks in, maintain your efficient stroke, focus on SLP and tilt tour casting plane accordingly. Read through www.chrisdore.com/dealingwiththewind.htm and www.chrisdore.com/improvingyourhaul.htm to increase line speed and put your fly infront of the fish.

Of recent i have been playing with the new airflo stealth ridgeline. Designed specifically for nz, by new zealanders this is a 12' clear tip floating line, based on the popular explorer backcountry taper. Yes, i am the local area rep for Manic Tackle Project, new zealands airflo distributer and the company who have designed this line, but as those of you who know me will attest, i call them how i see them. theres the disclaimer.

In theory, by using a 12' leader set up on the ridge stealth the colour of your flyline will now be 22' from the fish. great for those who struggle with long leaders and windy conditions. I must admit i was sceptical at first, until paul kirby and i fished the xxxxx river, where wary trout cruise slow pools in gin clear water. The usual scenario is that once you present to a fish seen maybe 40' away, another comes through and passes beneath your line. He then follows your line right up to your rod tip before taking off across the pool, alerting every other fish in he vicinity. On this day we found fish cruising under the clear tip to continue happily, and often taking the fly soon after. 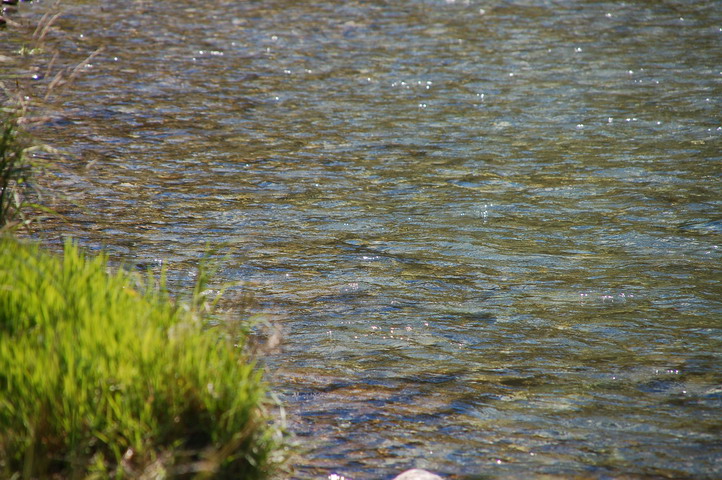 Another try out on the heavily pressured upper oreti saw us drift the line over numerous fish without alerting them. This is not often done, as many oreti regulars will attest.

I did find the line to occasionally get a little sticky in warmer weather. This is due to the supple polyurethene coating and the inability to incorperate teflon into the line for lubrication (doing so would make the clear tip turn white / opaque). However a quick clean with whizz lube or similar line cleaner / lubricant and the stealth was fine for several more expeditions.

If you land the line near the fish you will of course spook it, and for a line which is to be used to detect strikes blind nymphing it can be less efficient for those who lack in line control, but i believe than in many situations, particularly when sight fishing for wary fish, the new airflo stealth may have hit the mark for our clear water nz conditions. im loading stealths to my guide reels as i write.

So have a great new years out there guys and be safe. I still have the odd day available in Feb, March and April and so if you wish to get amongst it on thriver send me an email, and keep an eye out for my Awesome April page on chrisdore.com coming soon!